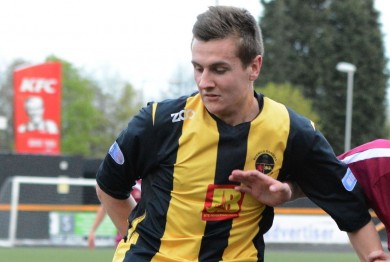 Berwick Rangers took to the Forthbank Astro pitch for their first competitive game since December 1st. They had beaten the Development League East leaders at Shielfield in October but after Albion’s opening goal, a repeat victory was never on the cards.

Berwick fielded five first team squad members. Albion played a similar number who had been in their party when the clubs’ respective senior sides met at Shielfield in early November. Another, Moses Olanrewaju, once on Brentford’s books, may have played himself into the top squad with an excellent performance. However, he would have been challenged for man of the match by teammates Sandy Cunningham and Tommy McAllister.

For Berwick, up front, Daniel Watt soldiered manfully on limited rations and put himself about despite being marked by the formidable Scotts, Davidson and Buist. Despite a couple of indiscretions including a booking, Ethan Anderson kept battling away but in short, it turned into a football lesson from a team who dominated physically as well as skilfully.

The game opened at breakneck speed and Rangers more or less held their own at first. Play switched ends after two Albion corners with Charlie Denton attempting a bouncer from 25 yards.
Robbie McNab spliced open the home defence with a 15th minute through ball and Olanrewaju confidently beat Mark Walters. Graeme Beveridge found it tough up against McAllister who once more got past the full back in the 23rd minute. Kieran Ingram attempted to rescue the situation but fouled the speedy number 11 three yards outside the box. Walters dived forward to collect Cunningham’s free kick but spilled the ball and Davidson headed in number two.

Two penalties followed, before and after a short half time break. Robert Wilson was compromised by David Morris’ questionable back pass deep inside the penalty zone and, wrong footed, brought down Cunningham. Ross Cavanagh scored and did so again five minutes after the change of ends. With Cunningham and Olanrewaju causing mayhem, the latter was clipped by Anderson. Walters got a hand to the spot kick but could not stop it going in.

In the 63rd minute, Moses turned both Morris and Ingram on a stunning run which was worthy of a goal in its own right. He was fouled before he could complete the job. To McAllister, Rangers’ wall was of little consequence and he smashed home the 20 yard free kick as if there was nobody in front of him. Ahead of the sixth goal, Walters saved from Lee Hamilton and Cavanagh. Olanrewaju released McAllister who tore down the left. Just before the bye-line, he passed across goal for Cavanagh to complete his hat trick by knocking the ball into the corner of the net.

Defender Hamilton worked his way forward again and finished his solo run with Stirling’s seventh goal, five minutes from time. Having earlier spent a short spell on the sideline, Morris went off for good after Berwick had used their three replacements. In truth, being one man down didn’t make much difference against such rampant opposition.