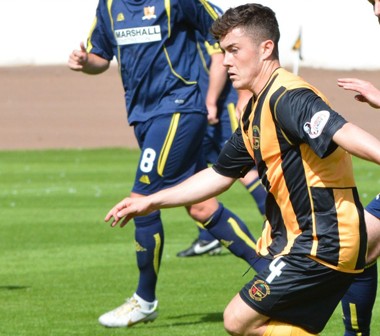 East Stirlingshire replaced Berwick at the foot of the Ladbrokes League
2 table as a first half double from Finn Graham and second half goals by
Dwayne Coultress and Darren Lavery, neither of whom played in the
midweek defeat at Arbroath, ensured Rangers’ first three pointer since
victory over the same team on October 3rd.

Early play was punctuated by clumsy fouls and the referee’s whistle. In
the 9th minute, Berwick won the first of three successive corners,
Robert Wilson heading the final one over the bar. They came closer to
scoring seven minutes later after Coultress and Stevie Notman worked the
ball to Lavery who was only a foot wide with a low drive.

David Morris put the ball in the net but the offside flag was already
up. Sixty seconds later, in the 25th minute, the next one was for real.
Coultress played the ball up the left to Michael McKenna who picked out
Graham inside the box from where he comfortably beat keeper Darren
Dolan.

Graham struck again in the 37th minute. He recovered both the ball and
his composure after stumbling when tackled and, again showing self
belief, had the ball in the net from 25 yards out.

As half time approached, Graham was once more well placed inside the
penalty area to receive Ewan McNeil’s pass. This time, his shot was on
the weak side but it still had Dolan scrambling to turn it away for a
corner.

After doing little of note in the first half, ‘Shire, with the wind now
behind them, opened the second half briskly. They won their first corner
of the game on 53 minutes. Jonny Fairbairn was booked for clattering
Nathan Shepherd whose runs from deep posed the greatest threat to
Rangers. The hosts went on to win a couple more corners, the second
hitting the post. Ross Gilmour was replaced by Jon Tully to play up
front but he made little impact, some in the Berwick camp more used to
seeing him as a central defender in Development League games.

McKenna was poised to increase the lead just short of 70 minutes but
Dolan made a good save. However, the stuffing was soon knocked out of
East Stirling. With the defence in trouble, Lavery played in Morris. It
was debatable if his shot would have gone in anyway but Coultress was on
hand at the far post to make sure that it did.

With less than 10 minutes remaining, manager John Coughlin introduced
new loanee from Morton Dylan Stevenson ahead of a four man move which
might have ended with fellow midfielder Graham’s hat trick but his shot
was too high.

Set piece work was a key element at training two nights earlier and in
the 88th minute, it paid off. Dolan flapped away a Coultress corner for
another one and from it, Lavery timed his jump to perfection to head in
Berwick’s fourth goal.

Right at the end, Kevin Walker was caught off guard by a long
Arbroath-style wind assisted lob from ex-Berwick man Chris Townsley. The
keeper managed to turn it on to the top of his net and also tipped away
the resulting corner.

There were several contenders for away man of the match. Graham for his
two goals. Coultress, who played like a man determined to cement a
regular starting spot. Morris, whose second half rampaging runs down
the right touchline were twice abruptly halted by fouls and McKenna, who
used spatial awareness to good effect to position himself or to find
others.

A much needed win for Berwick who by the end were playing with a
confidence so often missing this season. A sterner test beckons on
Boxing Day away to second in the table Queen’s Park.