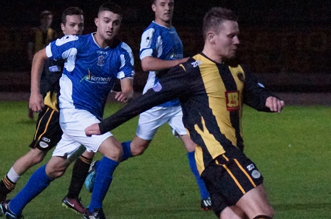 Andy Russell scored three of Berwick’s four goals against Haddington ( Photo copyright of Alan Bell )
Fielding a mixed side of first teamers and Under 20s and much talked about trialist Ian Black ( ex-Hearts, Rangers and Scotland ), a Berwick Rangers XI beat Haddington Athletic on the Juniors’ own Millfield ground in another pre-season friendly on Tuesday, July 21st.
The appearance of 30 year old Black, who scored a goal, somewhat overshadowed striker Andy Russell’s hat trick in a 4-2 win.
Berwick kick off their competitive season this Saturday, July 25th, away to Championship club St. Mirren in the 1st Round of the Petrofac Cup.