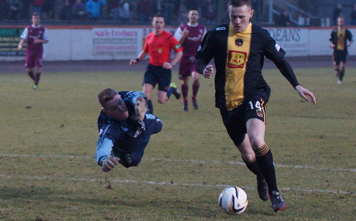 A superb performance earned Berwick Rangers a deserved 3-1 victory over the SPFL 2 leaders at Shielfield. Yet, when Thomas Grant put the visitors in front in the 63rd minute, home fans could have been forgiven for fearing that, once again, after dominating a match, Rangers would fail to win.

Manager Colin Cameron played an hour of the midweek Development League draw at home to Alloa and hinted afterwards that he might also start against the Red Lichties. He lasted even longer this time making way for Scott Maxwell after an influential display which included a part in the build up to Berwick’s second goal scored by Paul Willis. In the absence of the suspended Jonny Fairbairn, Stevie Notman partnered Kerr Young at the heart of the defence and both had outstanding games. Up front, Ross Gray and Darren Lavery put in a lot of hard graft.

Grant was on the field barely a minute before he netted against the run of play, taking advantage of a rare lapse by the home rearguard. Rangers finally penetrated Arbroath’s well organised defence a few minutes later. With shots being blocked, Lee Currie decided to have a pop, and helped by a deflection, wrong footed keeper Marc McCallum to make it 1-1. Willis made it 2-1 in the 72nd minute.

Arbroath threw everything at Berwick as they searched for an equaliser, McCallum even racing upfield for a late corner. He was back in his true position when Berwick launched another attack in the game’s final seconds but couldn’t prevent Andy Russell going round him to make it 3-1, a margin which was a fairer reflection of a match which drew an official attendance of 462.

Berwick fans will be hoping that the form shown against Arbroath and the confidence gained from the win will help see their team through to the Cup quarter finals in tomorrow’s ( Feb.17th ) replay at Shielfield which starts at 7:45 p.m.