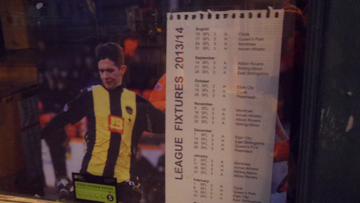 Berwick Rangers threw away a 2-0 lead against Elgin City at Shielfield on Saturday ( Oct. 12th ) in SPFL 2. Corners led to goals from Darren Lavery ( head ) and Dean Hoskins ( foot ). Shane Sutherland scored when Berwick were caught out after Elgin were awarded a free kick for a foul which wasn’t by Lavery. Sutherland also nabbed City’s equaliser despite being forced wide by keeper Paul Grant and Hoskins.

Rangers were then gifted a penalty when Stevie Notman ended up on the ground inside the box. Elgin probably thought justice was done when Lavery sent the kick the wrong side of the post. Another penalty swung the game for Elgin. Michael Dunlop was the culprit and Paul Harkins tucked the ball into the far corner of Grant’s net.

Devon Jacobs, with another wholehearted performance, was the unsurprising choice of the guests on ‘Ladies Day’ as Berwick’s man of the match.

** After leaking eight goals against Hibs Reserves at East Mains the previous Saturday, Berwick Res. partly made up for it with a 5-0 win at nearby Ormiston. Conor Scott scored three of the goals. It was the only East of Scotland League match of the day with most other teams involved in Qualifying League action.

*** Next Saturday, October 19th, Berwick Rangers are at home again, to Clyde in SPFL 2, kick off 3:00 p.m. The Reserves are at Greenock tonight ( Oct. 14th ) to play Morton in the SPFL Reserve League and on Saturday, visit Peebles Rovers in the East League hoping to repeat their season opening success there in the Qualifying League.

***** Also next Saturday, Oct 19th, the Trust’s ‘Elvis Presley Tribute Night’ starring Danny Allan takes place in the Black and Gold Club at Shielfield. Tickets at £10 ( including supper ) are still available from the Black and Gold, ‘The Pilot Inn’ and Trust Board members or ring 01289 304110. “);