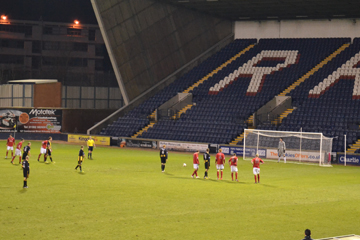 This was a top v. bottom of the table Development League clash as Stenhousemuir’s 2-1 win over East Stirlingshire 24 hours earlier saw them leapfrog Berwick at the foot of the table. When the home side raced into an early two goal lead, it looked as if it would be a cakewalk for the league leaders. But Rangers came out fighting after a half time pep talk from coach Jason Dair and despite playing the final 18 minutes with ten men, clinched a point, an unlikely achievement based on events in the opening 45 minutes.

Liam McCroary headed in Grant Anderson’s cross after only three minutes. Lewis Vaughan doubled the lead on ten after the Berwick defence was split wide open. Raith’s apparently greater pace and physical strength was clearly visible as Anderson rode a series of tackles only to see Vaughan head his cross well over Bleakley’s bar.

Rangers’ first real chances came Scott Dalziel’s way. Kyle Scott put him through but keeper Ross Laidlaw’s foot got in the way of a decent shot. Dalziel was then a couple of yards off target with a header from a pinpoint Dean Horribine cross.

Raith still looked the more likely team and Berwick’s struggles were reflected in the booking of Dean Hoskins for a second foul within the space of two minutes. Referee Lorraine Clark then booked Stephen Tulloch for an offence brought to her attention by a linesman.

There might have been a third, even a fourth goal, before the break as the Rangers’ rearguard was twice more sliced open. First, Elliot Ford fired across the face of goal and then Hoskins was on hand to clear the ball barely a yard from the line.

Hoskins slammed in Berwick’s first goal from the spot five minutes into the second half after, Horribine, who was starting to tease home defenders, was sent crashing as he threatened, close to goal. A minute later, Gregor Watson was replaced by Stephen Scott. This led to the unusual sight of Dalziel moving to the centre of defence.

McCroary ended a Raith raid by hitting the post but with sub Scott, Horribine and boss Colin Cameron, on one of his old stamping grounds, leading the way, Berwick now had self-belief and were fighting for every ball. With 20 minutes left, trialist Calum Helm, rose to head home Euan Bauld’s cross from the right. Injuring his ankle in the process, Bauld lasted only two more minutes before being carried off by Cameron and Tulloch. With all subs used, Berwick were reduced to ten men. Horribine dropped back into defence and Rovers craftily switched the dangerous Anderson to his flank to test him.

Dalziel picked up a yellow for a lunge of a tackle, hurting his knee at the same time. There was an escape for Berwick in the last minute when the now hobbling makeshift centre half appeared to push Anderson off the ball with his hand. Ref Clark was well placed and deemed no penalty.