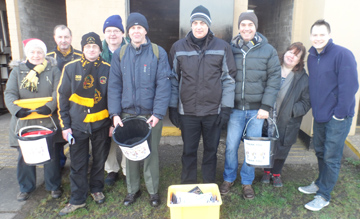 In a Trust led initiative our game against Peterhead on the 28th December was entry by donation only. It was suggested that £2 would be a suitable figure to donate, but there was nothing to stop anyone gaining entry for nothing (or nixey as they say). The turnstiles were operated by Trust members and used to count numbers rather than demanding an entry fee, with all donations being made by collectors with buckets around the points of entry. If that wasn’t enough, every fan was given a free Christmas card thanking them for their support.

The figure collected on the day was £1791.84, about 50% more than the gate money collected for an average game this season! Furthermore the club shop takings were up by almost 500%. Add to these figures a bumper sum was taken by the Supporter’s Club 50/50 draw, the day proved to be a successful promotion of both the Supporters Trust and the Berwick Rangers family in general. Sure, the Christmas spirit extended to some of our defending, leading to the visitors taking away three points from Shielfield but that’s football.

A special thanks to everyone who attended the game and made this a success, but especially to the volunteers who gave their time in effort to promote our football club.