Ashley Grimes, having scored twice against Berwick at the same Ainslie Park venue in the Betfred Cup in July, he did so again with a 20 yard free kick after a mere 1 minute and 23 seconds. Rangers’ keeper Robby McCrorie may have been a little slow in seeing it coming but nevertheless it was a beautifully struck dead ball to just inside the near post. It proved sufficient to give the Citizens their first SPFL points of the season.

Boosted by this perfect start, the hosts were the more creative side for the next quarter of an hour though the fanciest footwork displayed in this spell was when Berwick’s Marcus Godinho turned home skipper John Dunn this way and that. Going the other way, McCrorie saved from both Grimes and Craig Beattie. With plenty of bounce on the plastic surface, Grimes also sent the ball over the bar after only partially controlling a high pass which came to him across the box. Beattie meanwhile appeared to be modelling a new design in shorts with one leg longer than the other! 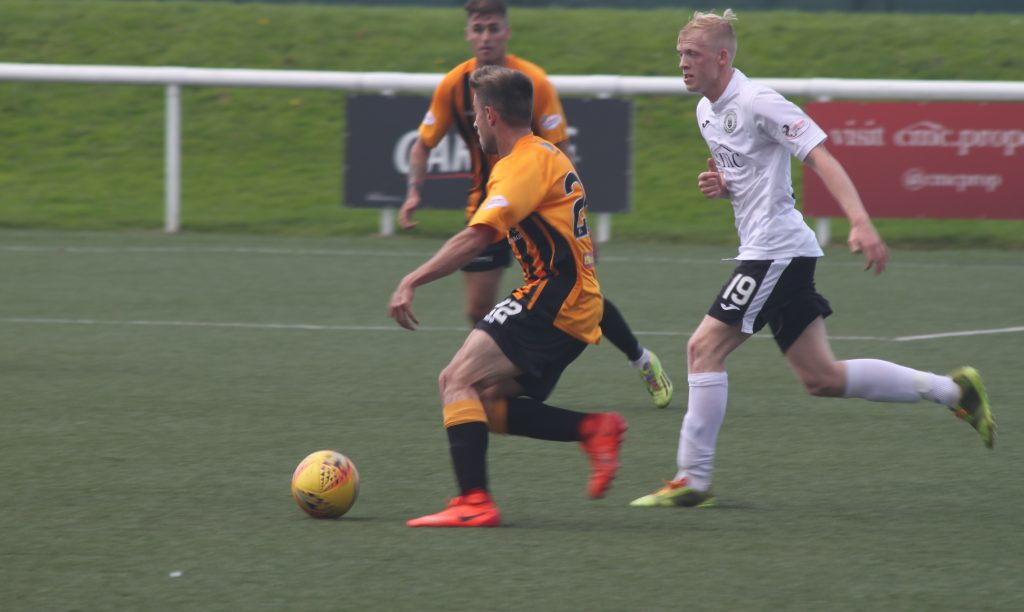 Marcus Godinho was the Social Media Man of the Match yesterday

Berwick came back with two great through balls from Lavery. A couple of chasing defenders were relieved to see goalie Fraser Morton go down at just the right moment to save from Michael McKenna. Seconds later, Aaron Murrell took another ball from Darren but his shot lacked force.

Play continued in the same direction and after an impressive build up, Keiran Stewart received the ball close to the right edge of the penalty area. Possibly, he took the wrong decision in passing to Murrell instead of carrying on himself to have a go. Balls were being distributed to the right places with the home defence working flat out to deal with them.

McKenna went back downfield to rob Ian Smith inside McCrorie’s area after he’d played a 1:2 with Andrew Blake but Berwick ended the half in the ascendency. Morton was lucky twice; after McKenna charged down his attempted clearance of a hefty punt from inside Rangers’ half and beside his post just managed to hold a flick from Pat Scullion.

The visitors also dominated much of the second period. In the 57th minute, Gary Phillips beat two players leaving Murrell to pass from out towards the corner flag. Stewart perfectly timed his run in but not his shot which flew skywards.

With more than an hour played, Berwick missed their best chance of the afternoon, Stevie Notman to Phillips and on to Greg Rutherford eight yards in front of goal. The away support fully expected him to open his league account for the season but somehow, Morton’s legs got in the way.

McKenna, previously down needing treatment in the first half, was helped off after failing to get up from the floor inside Morton’s area. His team went on to produce two more good chances in the final ten minutes when at times, every City man was inside his own half. Referee Lorraine Watson maintained her consistency in applying the advantage rule by waving play on when Stewart was fouled leading to Steven Thomson’s ball meant for Rutherford. Only this time, a home player cut across his path to kick it away for a corner. Scullion couldn’t quite reach Phillips’ excellent 45 yard touchline free kick, instead having to stop himself crashing into the goal post. 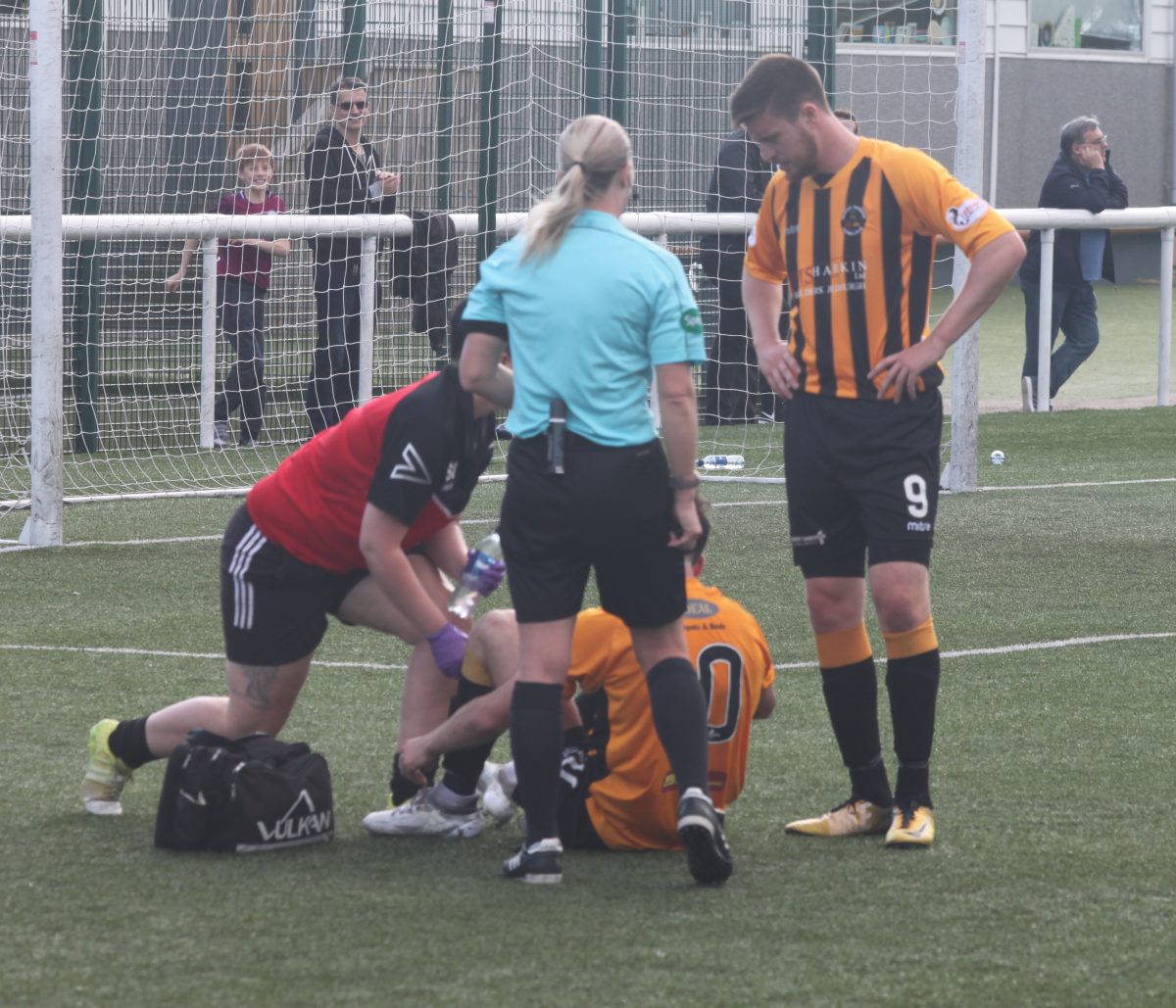 Michael McKenna receives treatment after colliding with the keeper.

Kevin McKinlay stopped sub Moses Olanrewaju with an unorthodox tackle as the former Stirling Albion player tried to complete a run past Berwick players. McKinlay was booked for persisting with comments to the referee after she chose to ignore his initial outburst over one of her decisions. The master of unorthodox tackles, Notman, exemplified Rangers’ endeavour, on three occasions using his speciality to take the ball from white shirted players. The ref was unhappy the fourth time and awarded a free kick, Notty getting a yellow for his reaction. 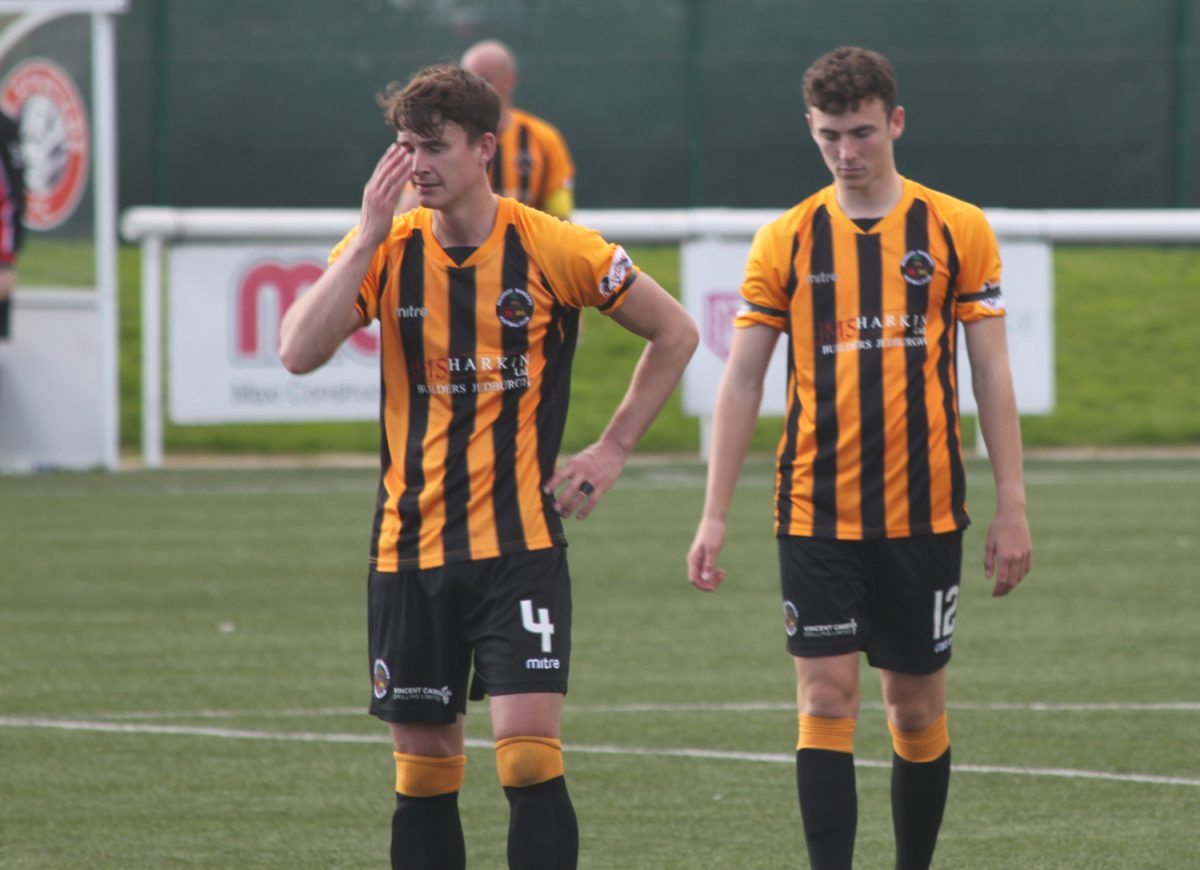 Steven Notman earned a yellow for reacting to a refereeing decision in the second half.

Contemporary practice is to try to take positives from a defeat and new boss Robbie Horn would surely have been pleased with the effort put in by his team. However, a major worry must be the low scoring rate with Berwick averaging just a goal per game in their first five league encounters and three of those came in the opening win over Clyde. 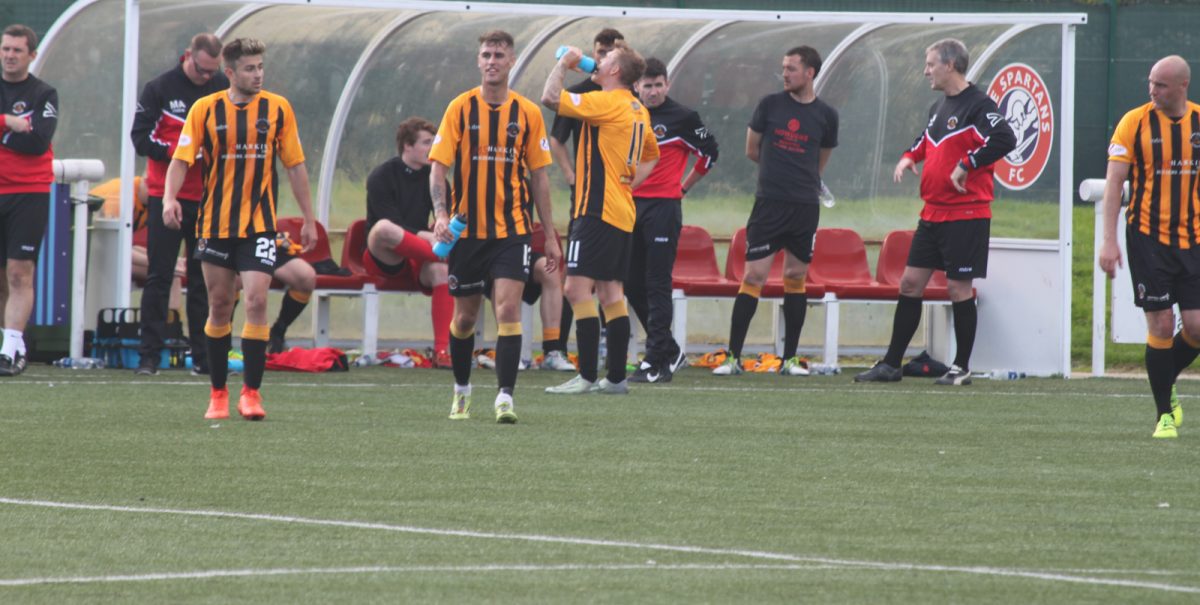 A break in play means refreshment time and a quick tactic talk.