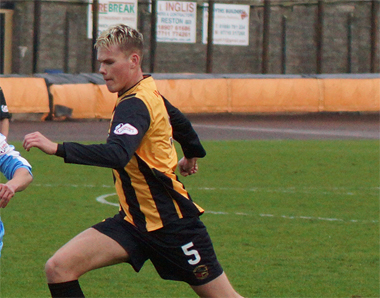 When Sandy Cunningham hit the post early in the second half, many of the
home fans probably felt that, despite dominating the opening forty five,
this was not going to be Berwick’s day. Blair Henderson made sure it was
when he headed in Finn Graham’s retaken 72nd minute free kick.

Rangers’ first half performance was altogether much better than where
they left off in Tuesday’s drab affair versus Queen’s Park. Good support
play helped them put together some exciting moves. Henderson laid off
many a good ball with head and foot and a couple of times left Montrose
men standing as he slipped out of tackles. Jordan McGregor gave an
accomplished performance at the back whilst Stevie Notman was busy all
over the place.

Berwick created more than half a dozen first half chances, amongst them,
an early arched shot from Darren Lavery when Graham’s free kick was
knocked back out of the penalty area. Lavery twice headed narrowly wide
and on those occasions when the ball was played over in his direction
out on the right, he had Andrew Steeves working flat out to keep up with
him.

Montrose keeper Jordan Millar dived to punch away a 6th minute shot from
Henderson and also held the big man’s header when he connected with Ewan
McNeil’s cross. Millar did well to stop a strike from McNeil himself
after Henderson headed down Graham’s cross and Cunningham’s snapshot
from outside the box ended barely a foot above the crossbar.

Montrose got in a few efforts of their own. Gary Fraser, who didn’t see
out the first half,  pulled away from defenders but aimed too high. A
Notman miskick presented the ball to Terry Masson. He held his head in
his hands as proof of his disappointment that he was only able to volley
it over the bar. Almost on half time, Ross Campbell’s thumping free kick
took a deflection for a corner.

The Gable Endies came more into it in the second period as Rangers lost
some of their fluency but were given a reprieve when their defence was
cut open, Lavery putting Cunningham through. With Millar out of his
goal, he shot towards an empty net. Neither he nor the Rangers’
supporters could believe it when instead of hitting the back of the net,
the ball bounced off the far post. Immediate thoughts were on the lines
of might Berwick’s eventual fate this season be determined by this piece
of wood?

Notman buckled on the end of a crunching tackle by Masson with whom the
ref had words when he later fouled the same player. McNeil’s long free
kick was blocked.

The home side were beginning to look less assured in defence and were
fortunate when Fraser’s replacement Ryan Ferguson clipped the ball over
the bar as the clock passed the hour mark. Long throw man Campbell
threatened inside the box until McGregor cleared the danger. A shot from
Masson was deflected on to the post for a corner.

The free kick leading to the winning goal was awarded when Callum Crane
was sent flying. Having taken a knock earlier in the half, McGregor went
off a minute later but there was a further three minutes’ play before
Robert Wilson got on to replace him.

Berwick endured some more anxious moments, some self-induced. Kevin
Walker could only send Brian Martin’s bad back pass for a corner. With
the home support urging Grant Irvine to blow for time, the Angus side
brought all but Millar into the Berwick half. Notman’s decisive tackle
on full back Greg Pascazio eventually relieved the pressure.

The Berwick players deserved the end of match applause. A look at the
league table shows this result puts Montrose back in the relegation mix
and with East Stirling losing at Elgin, Berwick are now five points
ahead of the bottom club who are due to play their game in hand away to
Clyde this Tuesday, March 1st. 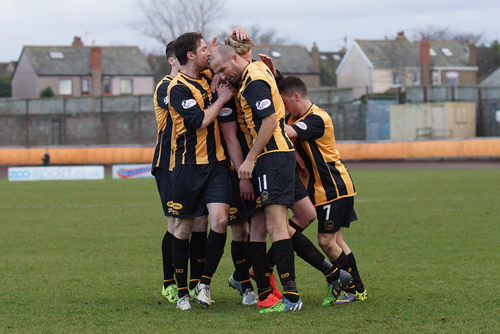