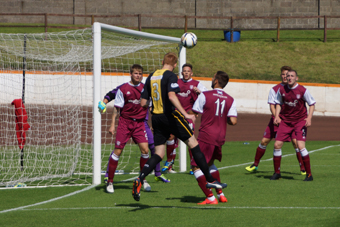 By now, all UK based Berwick Rangers Supporters Trust members should have received their copies of the Summer, 2014 newsletter and a calendar covering the new season highlighting Berwick Rangers’ fixtures.

Prior to last Saturday’s ( August 9th ) home game against Arbroath, the new Trust recruiting poster was distributed to spectators as they entered the ground. The crowd of 590 included holidaying families from Wiltshire, Essex and Nottingham visiting Shielfield for the first time. They witnessed a definite ‘game of two halves’. Berwick dominated the opening forty five minutes but had only an early gifted goal by Paul Willis to show for it. With their turn to have the advantage of the slope, Arbroath went on to boss the second half and finished 2-1 winners. Minus the suspended Lee Currie and Paul Currie, Berwick were increasingly ineffective in midfield as the game wore on. All round, a disappointing start to this season’s SPFL 2 campaign.

** On the Tuesday prior to the Arbroath game, a Berwick Rangers XI drew 2-all with East of Scotland League Duns in a friendly at the Berwickshire club’s impressive new home, New Hawthorn Park. Rangers’ assistant manager Robbie Horn scored one of the goals.

*** Last season, several Trust members commented on the poor lighting in the turnstile area at Shielfield. New lights have now been installed in and around the turnstiles. The Trust will donate the near £300 cost of this work to the football club.

The Trust has also offered to pay a much smaller amount for a new set of corner posts with secretary Isla Barber making the accompanying flags.

**** A reminder that the next meeting of the Trust Board will be on Saturday, August 23rd, 2014 in ‘The Pilot Inn’, Low Greens, Berwick commencing at 11:00 a.m. The meeting is open to any Trust member.