Morris scores all five goals in 5-2 win over Dumbarton 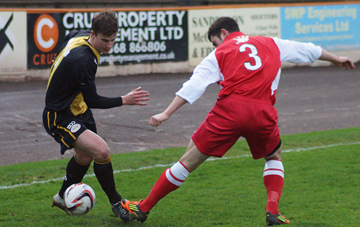 After last Saturday’s 4-0 win over Stirling Albion, new Berwick Rangers manager Colin Cameron got an early chance to again run his eye over his playing squad in a friendly against Dumbarton on the artificial surface at a rain lashed Toryglen Football Centre in Glasgow on Tuesday night ( January 21st ).
Dumbarton, who are not running a reserve team this season, fielded a mixture of first team and under 19 players. Cameron gave a start to all of his listed substitutes for the Stirling game plus Ross Brady, Ben Miller and Dean Carse who had all played for the Reserves at Spartans on the same day. Brady limped off after 37 minutes after injury in a tackle and was replaced by Devon Jacobs.

Although the match produced seven goals, there were only two scorers! Berwick raced into an early 2-0 lead. Carse put Josh Morris through for number one in the 10th minute. Two minutes later, with a diagonal kick, Morris hoisted Kenny O’Brien’s corner ball into the far top corner of the net.
The Sons’ Bryan Prunty then imitated his Berwick counterpart with two goals in quick succession to bring the scores level. The Rangers’ defence steadied after this and Morris restored Berwick’s lead from the spot after Carse was felled inside the box. A through ball from Miller set up Morris for his and Berwick’s fourth goal.

Billy Bald made a fine one-handed save from the experienced Scott Agnew. Back at the other end, O’Brien created the space for Carse who was unlucky to see his finely tuned shot run the wrong side of the post.

The second half began with Lewis Turner, Miller and Stevie Notman all going close and O’Brien hit the bar. Morris eventually stretched the lead with another precise finish after taking an excellent pass from Dean Hoskins. Scott Dalziel, who had replaced Notman, was then also lost to injury allowing Stephen Tulloch to make a first appearance in weeks.

Damian Gielty, relishing the chance of a full 90 minutes in midfield, was inches off target with a low drive as the goals dried up. The introduction of a trio of youngsters for the final 20 minutes sparked new life into the West of Scotland team but without them seriously threatening Bald.
Berwick Rangers: Bald, Turner, Brady ( Jacobs ), Notman ( Dalziel ) ( S.Tulloch ), Dunlop ( Hoskins ), Fairbairn, Carse, Miller, Morris, Gielty, O’Brien