Volunteer Rhona Beresford who was shaking her bucket to fans arriving at yesterday’s game in which £1670 was raised on top of the amount paid by the Trust to sponsor the game.

The official attendance at the Berwick Rangers Supporters Trust-sponsored free admission Ladbrokes League 2 game between Berwick Rangers and Arbroath on Saturday ( Aug. 29th ) was 721, about 50% higher than for the previous home league game against Montrose on August 8th.

The Trust would like to thank all those who attended and who donated to the bucket collection which raised £1,670 ( + two euros! ) to help the football club.

On field, the game ended as a 2-2 draw. Berwick raced into a 2-0 lead inside the first quarter of an hour ( scorers Darren Lavery and Michael McKenna ) but a goal in each half, the second only two minutes from time, earned the visitors their first point of the season. The result also sees Berwick move up two places in the table into 4th spot after four matches played. 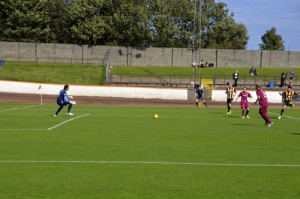