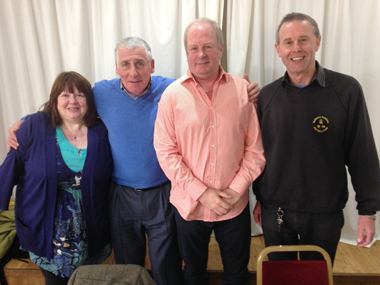 ‘Pogo’ related how he had signed for Berwick from Hearts in 1979.
”There were no goalscoring problems like now. We had players like Peter
Davidson, Eric Tait, Jim Morton and Roddy Georgeson.” He described a
Scottish Cup tie against a Hibernian team which included George Best as
the match which stands out from his time at Berwick. He was given the
task of marking the famous Northern Ireland international. The tie
finished 0-0. ”We hit the bar five minutes from time and lost the
replay 1-0.”

For ‘Pogo’, the overall high point was being in the same team as Dave
Smith. ”He was tremendous to play with. He told players that if they
were in trouble, just pass the ball to him!”

David Moyes echoed ‘Pogo’s’ views on player manager Smith, the
ex-Glasgow Rangers and Scotland international. ”The greatest player I
ever played with. He and chairman Alex Macnab put Berwick on the map.
The players were well looked after by Alex Macnab.” ‘Moysie’ emphasised
his belief that ‘Berwick is a great football club’.

He too, referred to Jim Morton…”excellent”…and Peter
Davidson…”pace out wide” whilst steel was provided by the likes of
Stewart Wheatley. ( By himself, too. He admitted being sent off seven
times during his career. )

Both men were critical of the modern game. ‘Pogo’, who scored a fair few
goals himself, lamented the fact that so many teams tend to play with
only one forward. He agreed that the style was now ‘robotic’. ‘Moysie’
was convinced there had been a decline in the standard of play even in
the English Premier League.

Before the guest speakers, Rangers manager John Coughlin spent a few
minutes addressing the audience, having kindly agreed to make an
appearance at a few days’ notice.

The existing ten member Trust Board was re-elected with Isla Barber
staying on as secretary. It was also agreed to appoint new auditors to
review the annual accounts. Though these for 2014-15 showed a deficit of
£659, the account has always been healthily in the black over the full
life of the organisation ( as it is today ). Trust membership currently
stands at 242.

**Whilst the Trust AGM could be considered a success, what followed on
the field most certainly could not. In a pitiful performance, Berwick
slumped to bottom of the table as they were mauled 5-0 by Clyde with
whom they had drawn 1-1 at Broadwood at the end of September. David
Gormley scored four of the goals. Scott Linton  headed in the third one
rounding off a piece of play which cheekily exposed the frailties in
Berwick’s defence.

The home side hardly managed a decent shot on goal, their most dangerous
efforts being two Jonny Fairbairn headers, one of which hit the bar.
Stevie Notman was about the only player to earn pass marks.Supporters
who had been at Annan the previous week were at a loss to comprehend how
a team which had played relatively well then and were unfortunate not to
take at least a point, could now perform so badly. Some of the
spectators who stayed on to the bitter end let the players know their
feelings with a resounding chorus of boos.